Showing posts from May, 2014
Show all

India Voted, and this is what the numbers really say... 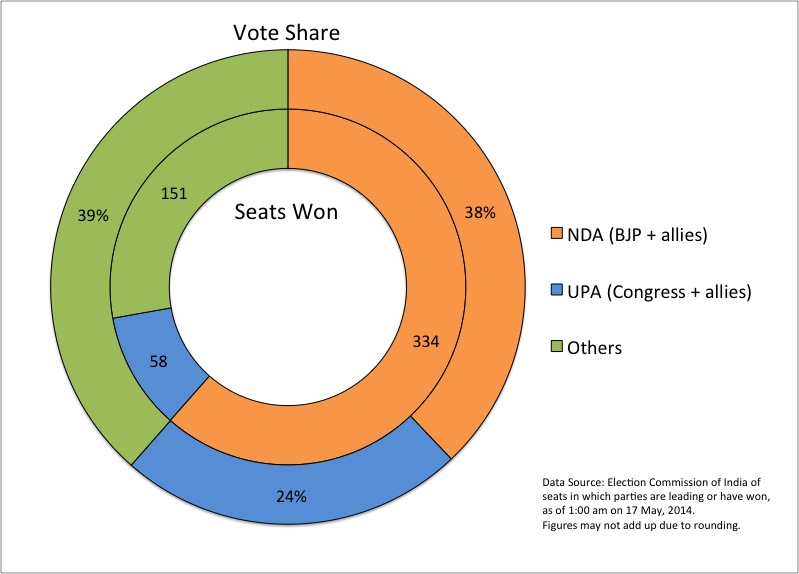 After five gruelling weeks, Friday's vote count marked a tremendous victory for the Bharatiya Janata Party (BJP) and its National Democratic Alliance (NDA) allies, under the leadership of its controversial Prime Minister in waiting, Narendra Modi. With almost all of the record-setting 550 million votes counted, the Country's once-dominant Congress Party , that has hobbled with its United Progressive Alliance (UPA) allies through the past five years, has been severely punished. This was a hard fought and fair battle, and Mr. Modi and the BJP deserve their victory. The BJP's strong showing in terms of seats won in India's 543 seat Lok Sabha (parliament), gives it an absolute legislative majority. When its NDA allies are included in the count, it has an even stronger mandate to make change. Even BJP-friendly psephologists failed to gauge the wide margin of the final tally. As the BJP prepares to take the reigns of government, they should do so with thought and caut
Read more

No amount of litigation, wealth, prayer, or political effort is going to make it rain. We have to stop pretending that we don't have a water problem and start paying the true cost of what we use. Photo credit: the World Bank Group As  California struggles with its worst drought in its history , I'm stunned at how little it seems to matter in terms of people changing their habits and plans. For a state so populous, and so reliant on such limited supplies of ground and river water to quench the thirst of its farmers, residents and businesses, sweet little was done till recently to implement conservation measures. Housing continues to sprawl, farmlands continue to be paved, and even more cars get even bigger. I don't mean to pick on California though. Over 90% of Texas is currently a dust bowl of denial with a far bigger problem than California has on its hands, and its God-fearing, finger-pointing, creationist politicians have their climate-change denying heads buried in the
Read more
More posts