Disruptive power: How innovation is reshaping the energy landscape

January 08, 2015
Recent gyrations in the price of oil mask longer-term shifts, driven by innovation and fresh ideas, that are altering the very structure, geographies and politics of the energy industry.

The plunging prices of oil over the last half of 2014 have dramatically altered the global energy landscape. The US' successes over the last three years in tapping its (environmentally controversial and finite) resources of shale oil have repositioned it from an importer to a potential exporter of oil. This unexpected excess coupled with reduced demand has rebalanced the supply and demand equations for carbon-based energy supplies thereby driving down the price of oil by almost 50% by the end of 2014. This has had cascading impacts on sectors such as government subsidies, electricity production, aviation, transportation and the consumer's willingness to splurge their saved gas money on more Christmas gifts.

These recent gyrations in the prices of oil mark significantly more important, long-term shifts fuelled by innovation and fresh ideas that are altering the very structure, geographies and politics of the energy industry. The energy equation of the future will be driven by renewables and smart grids, which are far less dependent on centralized production or oil and nuclear resources. Consumers will gain greater control on how and where they get their power from. Energy importers like India and China would be well advised to embrace these innovations instead of continuing to pursue conventional coal, gas, nuclear and oil-based production models.

Smart grids and renewables are entrenching themselves firmly into the energy networks that feed our cities and nations. I see both these as grassroots reactions to monopolies such as electric utilities and the oil industry that have not only held consumers captive, but have also played a direct role in degrading the environment and furthering climate change.

Smart grids, as their name suggests, are intelligent networks that not only pipe energy between producer and consumer but also include data that allow that energy to be managed, directed and used intelligently. These grids alter long established consumer-producer relationships. Smart meters that sit on these grids allow consumers to monitor the price of electricity they consume and choose when to use it. For example: doing energy intensive tasks like laundry when prices are at the cheapest.

Germany has long been a leader in this field, but latecomers such as the Province of Ontario in Canada have used policy to further innovation by not only mandating the installation of these meters, but also allowing consumers to go a step ahead and make a conscious choice about the source of the energy they are buying. These two changes have helped spur the emergence and viability of environmentally conscious energy producers and offer models for governments across the world to embrace.

Smart grids have also tilted the balance of power overnight allowing consumers to become producers. Households in many parts of the world assisted by government subsidies can now install clean, renewable energy sources such as solar panels or windmills on their properties and sell extra energy back to the grid they could previously only buy from. In a recent article in Commonwealth Magazine, my friend Jim Aloisi has called for the business and political establishment in the USA to adopt more innovative approaches to renew their ageing energy infrastructure. Such changes increase the mix of clean energy, reduce transmission loss, move profit from the utility to the consumer, and empower them to act. This scale of disruption is comparable to what Uber has done to the taxi industry globally but with far more dramatic consequences. In early 2014, Barclays downgraded long-term bonds from US electricity producers citing the inevitable shift in "power" from producers to consumers because of smart grids and distributed energy production.

The quiet march of renewable energies like solar, wind and tidal are inevitable replacements in the face of a finite supply of oil, coal and uranium. Unlike oil, coal and uranium though, they can be built almost anywhere, do not have to be concentrated in one place and require far less capital. A farmer can build a low-cost windmill and generate wind energy from her or his farm, unlike an electric utility that would need investment in one single plant at a significant cost. Individuals can now produce energy on their roofs and in their gardens. Nations that were formerly energy importers can harness their citizens' entrepreneurial spirit to do the same. Denmark's topography is dotted with windmills on farms and along roads that produce over a third of the country's energy.

More remarkably, a quiet solar power initiative led by Germany and backed by countries in Europe, Africa and the Middle East has the power to redraw the global geopolitical energy landscape. The DESERTECinitiative seeks to leverage solar power at a massive scale to not only generate energy but to provide clean water (through desalination) and economic development across large swathes of Africa. So vast is the power of Sun that as illustrated below, solar energy from just a small patch of the Sahara could power the entire planet. 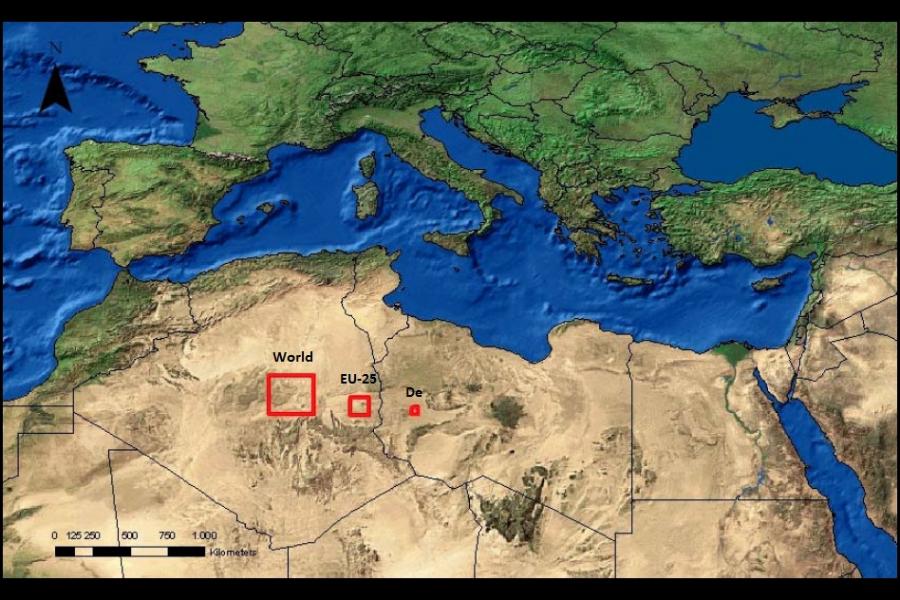 Area needed for solar power plants to generate sufficient electric power in order to meet the electricity demand of the World, Europe (EU-25) and Germany (De) respectively.Image by Nadine May, Data by the German Center of Aerospace (DLR), 2005.Source: www.TRECers.net

Transmission lines could easily carry this energy from hundreds of small and large solar farms across Africa's deserts through Tunisia, Turkey and Morocco through robust, distributed grids to power Europe and Asia. This could dramatically reduce both continents' need for oil and gas. Russia's manipulative stranglehold on gas supplies into Central and Eastern Europe would be broken and desert nations like Saudi Arabia could reinvent themselves as powerhouses for clean energy, even as their oil stocks dwindle. Allowing farmers and land holders across North Africa and the Middle East to produce energy would usher in more democratic regimes than totalitarian oil-dictators have allowed for. North and South America could similarly tap into their own solar resources through projects such as the solar plants in the US' Mojave Desert and transmit the energy across both continents. China and Germany - both leaders in producing infrastructure for the solar industry - would benefit hugely from such initiatives.

The world is being reshaped slowly and silently in important and powerful ways. Wherever you are in the world, the next time you turn on a light or decide to share this article on your computer, think about where the energy that you are using comes from. You could be producing it instead of consuming it in the not too distant future and changing the world for the better....